Honorary President of the Prix Pictet, Kofi A. Annan (1938 – 2018) was the seventh Secretary-General of the United Nations, serving two terms from 1 January 1997 to 31 December 2006, and was the first to emerge from the ranks of United Nations staff. In 2001 Kofi Annan and the United Nations were jointly awarded the Nobel Prize for Peace with the citation praising his leadership for “bringing new life to the organisation.”

Since leaving the United Nations, Kofi Annan continued to press for better policies to meet the needs of the poorest and most vulnerable, particularly in Africa. He used his experience to mediate and resolve conflict. In Kenya in early 2008, Mr. Annan led the African Union’s Panel of Eminent African Personalities to help find a peaceful resolution to the post-election violence.

In addition to his work with the Kofi Annan Foundation, Mr. Annan served as the Chairman of the Africa Progress Panel (APP) and the Alliance for a Green Revolution in Africa (AGRA). He was also a Board member, Patron or Honorary member of a number of important organisations. Mr. Annan served as the Chancellor of the University of Ghana, a Global Fellow at Columbia University in the United States, and Li Ka Shing Professor at the Lee Kuan Yew School of Public Policy at the National University of Singapore. On 23 February 2012 Mr. Annan was appointed as Joint Special Envoy of the United Nations and the League of Arab States for Syria. 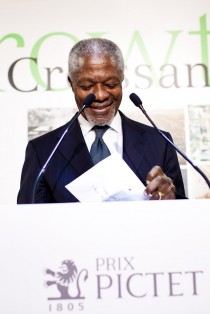