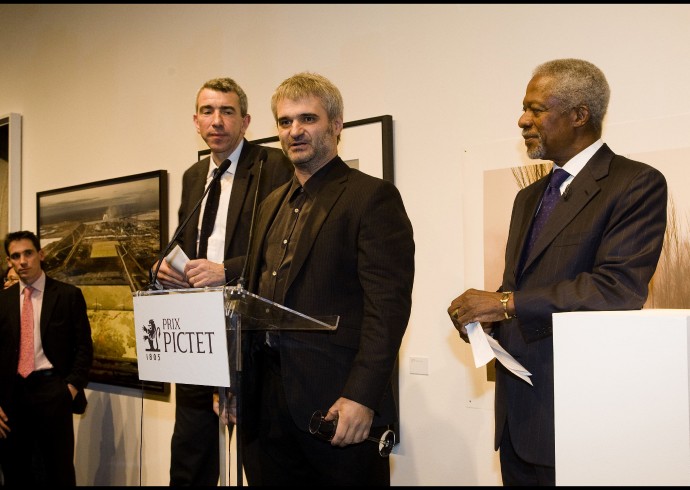 Speaking at the opening of the Prix Pictet Water exhibition at the Palais de Tokyo in Paris on 30 October 2008, Kofi Annan, Nobel Laureate and Former Secretary General of the United Nations, announced the winner of the inaugural Prix Pictet as Canadian photographer Benoit Aquin.

The series of photographs entered by Benoit Aquin was on desertification in China and entitled The Chinese Dust Bowl.

The award was presented in a glittering ceremony at the Palais de Tokyo attended by the majority of the shortlisted artists and distinguished guests from the worlds of art, business and sustainability.

“It is my hope that the Prix Pictet, the world’s first prize dedicated to photography and sustainability, will help to deepen understanding of the changes taking place in our world and raise public awareness about the urgency of taking preventative action. Each artist has addressed the environmental and social challenges we face in their own personal way. The result is a series of powerful images which seeks to confront us with the scale of the threat we face and to inspire governments, businesses, – and all of us as individuals – to step up to the challenge and support change for a sustainable world.”

Benoit Aquin was chosen by an international panel of independent judges, chaired by Francis Hodgson (head of the photographs department at Sotheby’s, London) who said:

“The jury were impressed by the overall standard in this the Prix Pictet’s first year. The photographers have made it a really tight competition. In the end we are pleased to acknowledge the quite excellent series that Benoit Aquin has made on desertification in China, which in the opinion of the jury just pipped a group of other excellent candidates. We are proud to have set a standard to which future Prix Pictet nominees can aspire and we are delighted to compliment Benoit Aquin on a quite splendid achievement.”

Benoit was awarded with a specially commissioned trophy, designed by London based jeweller Vicky Ambery-Smith. He also receives CHF 100,000.