Loa Haagen Pictet is a Danish art historian and curator. She graduated with a gold medal from Copenhagen University and first worked for the Staten Museum for Kunst (Royal Museum of Fine Arts) in Copenhagen before her appointment as curator for Kunstmuseet Køge Skitsesamling, Køge. There she curated shows on contemporary architecture as well as the first exhibition of Ferdinand Hodler ever held in Scandinavia.

Settling in Switzerland in 1997, she worked as a freelance curator, lecturer and author of scientific articles as well as gallery director, before being appointed curator of The International Red Cross and Red Crescent Museum in Geneva in 2003. There she curated several exhibitions in the field of photography such as: Zona by Carl de Keyser, War by VII and The Belfast Maze by Donovan Wylie and Amanda Dunsmore. In 2006, she joined the Mamco (Musée d’Art Moderne et Contemporain) in Geneva as head of education programmes as well as a regular lecturer. Since 2004, she has been responsible for building up the Pictet Group’s Art Collection of Swiss art from 1805 to present day. 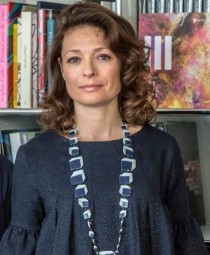