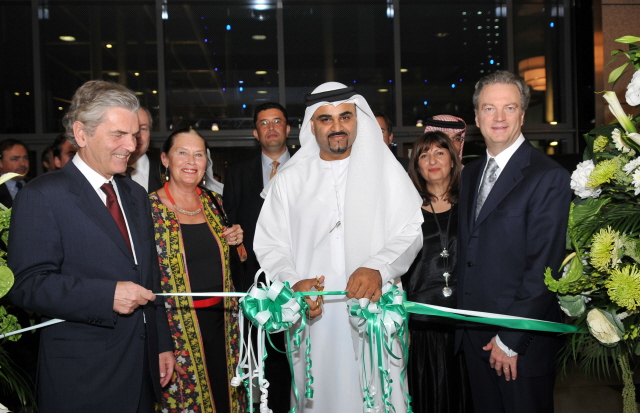 Speaking at the opening of the Prix Pictet exhibiton in Dubai HE Dr. Omar Bin Sulaiman, Governor of the Dubai International Financial Centre (DIFC) said, “We are pleased to extend our support to the Prix Pictet as part of our commitment to sustainability, which is at the core of socially responsible business. It is our firm belief that policies and practices that promote sustainability are critical to the growth and development of corporate organisations. The exceptional photographs displayed at the Prix Pictet exhibition in Dubai will serve to raise awareness of sustainability both in the business community and the larger society.“

The exhibition of work by the artists shortlisted for the inaugural Prix Pictet opened at the Dubai International Financial Centre (DIFC) on Sunday 9 November. It will run until the end of November, coinciding later in the month with the DIFC’s major symposium for global business leaders. The opening reception was attended by over 130 VIP guests as well as press TV and Radio. The Dubai exhibition is the first step on an international tour which will visit Thessaloniki, London and Geneva with further venues still to be announced.

Prix Pictet will next be at the Thessaloniki Museum of Photography, in Greece in December where it will remain until the end of March. Images from the Prix Pictet shortlist will also be displayed at the Intelligence Squared symposium which will be held in January 2009.