Joana Choumali, born in 1974, is a visual artist/ photographer based in Abidjan, Côte d’Ivoire. She studied graphic arts in Casablanca (Morocco) and worked as an art director in an advertising agency before embarking on her photography career. She works mainly on conceptual portraits, mixed media and documentary photography. Much of her work focuses on Africa, and what she learns about the innumerable cultures around her. In her latest works, Choumali embroiders directly on the images completing the act of creating the photograph image with a slow and meditative gesture. Choumali has exhibited her work around the world.

In 2014, she won the CapPrize Award and the 2014 Emerging Photographer LensCulture Award. In 2016, she received the Magnum Emergency Grant Foundation, and the Fourthwall Books Award in South Africa. Her book HAABRE, was published and edited in Johannesburg in 2016. In 2017, she exhibited her series Translation and Adorn at the Pavilion of the Ivory Coast during the 57th Venice International Biennale.

On 13 November 2019, she became the first African winner of the Eight Prix Pictet for her series Ça va aller (It will be ok) on this cycle’s theme of ‘Hope’. 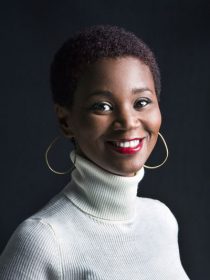