Nadav Kander is one of the most original and highly regarded photographers of our time. His work forms part of the public collection at the National Portrait Gallery and the Victoria and Albert Museum in London.

Kander was born in Israel but grew up in Johannesburg. He began photographing at 13 and later, when drafted into the South African Air Force, worked in the darkroom printing aerial photographs. He moved to London in 1986, where he lives with his wife, Nicole and their three children.

His work appears in publications including The Sunday Times Magazine, Rolling Stone, Another Man and Dazed & Confused. In 2009, The New York Times Magazine devoted an entire issue to Obama’s People, his 52 portraits of President Obama’s inaugural administration.

Exhibitions include Obama’s People at Birmingham Museum and Art Gallery (2009), Yangtze From East to West at Flowers Gallery, London (2008), Shanghai Art Museum, China (2006) and Keep your Distance at the Palais de Tokyo (2005).

Kander has received numerous awards from the D&AD and the John Kobal Foundation in the UK and Epic in Europe, Art Director’s Club and IPA in the USA. He was awarded the Royal Photographic Society’s ‘Terence Donovan’ Award in 2005 and 2007. He’s also recently been awarded the Silver Photographer of the Year Award at Lianzhou International Photo Festival 2008 in China.

Nadav Kander is represented by Flowers Gallery in London and Pekin Fine Arts in Beijing. He won Prix Pictet Earth for his series Yangtze the Long River. 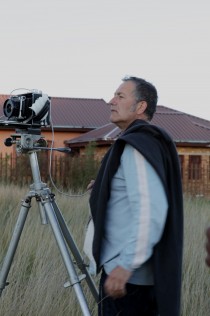