Fernando Arias has lived and worked between Colombia and England for the last 20 years. Through video, photography, installation, live action and cultural activities, he explores the human condition; from physical and mental states to cultural and social conditioning. Issues of sex, religion, drug politics and identity are themes present in his work. The outputs are often confrontational, creating a consciousness in the participants and viewers about the issues they face.

Arias has set up Mas Arte Mas Acción (www.masartemasaccion.org), a cultural organisation that generates projects to raise awareness of people from remote regions and deprived urban settings, revealing their realities, expressing their concerns and voicing their ideas. The programme includes a series of residencies on Colombia’s Pacific coast, for artists to develop ideas, share their experiences and skills and learn from people living there. As the world’s third most bio diverse tropical region, artists are offered ‘respite’ from the demands of 21st century urban life.

Since Arias won the Colombian National Art prize in 1994 his work has been exhibited internationally. In 1999 he represented Colombia at the Venice Biennale. Other Biennials include the III Bienal de Bogotá, the V and VIII Bienal de La Habana, the II Bienal de Mercosur and the I Bienal de Tirana. 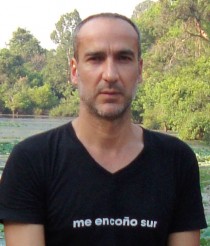