Roger Ballen is one of the most important photographers of his generation. He was born in New York in 1950 and for over 30 years he has lived and worked in South Africa.

His distinctive style of photography has evolved through the use of a simple square format in stark black and white. In earlier works his connection to the tradition of documentary photography is clear but through the 1990s he developed a style described as ‘documentary fiction’. After 2000 the people he first discovered and documented living on the margins of South African society increasingly became a cast of actors, working with Ballen in the series’ Outland and Shadow Chamber.

The line between fantasy and reality in his more recent series’ Boarding House and Asylum of the Birds (Thames & Hudson, 2014) has become increasingly blurred and he has employed drawing, painting, collage and sculptural techniques to create elaborate sets. Ballen has invented a new hybrid aesthetic in these works but one still rooted firmly in photography.

His most recent film is the short psychological thriller Roger Ballen’s Theatre of the Mind completed while exhibiting at the Sydney College of Arts, Australia.

The drawn line in his oeuvre was explored in the exhibition Lines, Marks and Drawings: Through the Lens of Roger Ballen at the Smithsonian National Institute of African Art in Washington DC (2013). Other recent exhibitions have taken place in Berlin, New York, Oaxaca and Cape Town. 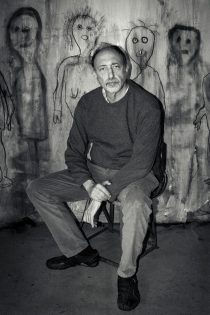