After studying in Paris with Michel Foucault, Roland Barthes and Pierre Bourdieu, Christian Caujolle became an art critic for the daily newspaper Libération in 1979 and focused on photography. In 1981 he became picture editor of the same newspaper and continued to write about photography books and exhibitions.

In 1986, he created VU’ Agency, the first ‘photographer’s agency’ and, ten years later he established the VU’ Gallery. He left VU’ in 2007 and teaches, writes, curates exhibitions and festivals.

He has been involved in a number of international juries, including World Press Photo and Prix Niepce and has published an important number of books about photographers like Lartigue, Salgado, Depardon, William Klein, Christer Strömholm, Anders Petersen, Cristina Garcia Rodero, Isabel Muñoz, Peter Beard, Bernard Faucon and many others.

Art Director for Les Rencontres d’Arles in 1997, he also collaborates with FotoEspaña in Madrid and created Photo Phnom Penh in Cambodia in 2008. 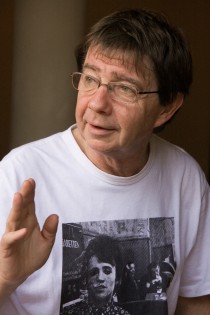