Elvis Fuentes studied Art History at the University of Havana, Cuba. Upon graduation in 1999, he worked as curator at The Ludwig Foundation of Cuba, organising over a dozen projects per year. In 2004, he was invited to work in the organisation of the San Juan Poly/Graphic Triennial (former San Juan Print Biennial) at the Instituto de Cultura Puertorriqueña. In 2006, Fuentes won the Grand Prix of the Ljubljana Print Biennial with the curatorial project, Print as Metaphor.

He also curated other exhibitions such as a retrospective of the early work of Felix Gonzalez-Torres, an exhibit on Lorenzo Homar’s caricatures from the Firestone Library collection, Princeton University, and a survey show of 30 years of video-art in Puerto Rico. In 2006, after co-directing the first international art fair in the Caribbean, CIRCA Puerto Rico, he joined El Museo del Barrio’s curatorial staff. Fuentes co-organised two biennials of Latino Art in New York, called, The [S] Files (2007, 2011), and curated the first installment of the Permanent Collection Galleries of El Museo for the reopening and 40th anniversary in 2009.

He served as assistant curator for Nueva York 1612-1945, organised by New-York Historical Society, 2010. Other projects include a survey exhibition of contemporary Cuban art, Killing Time, at Exit Art (New York, 2007), co-curated with Yuneikys Villalonga and Glexis Novoa, and The Spanish Nexus (Instituto Cervante New York, 2009). In 2012, Caribbean: Crossroads of the World opened concurrently at El Museo del Barrio, The Studio Museum in Harlem and Queens Museum of Art. This project, which Fuentes directed, was hailed as, “the big art event of the summer season in New York”, and declared the show of the year by renowned New York Times critic Holland Cotter.

Fuentes co-edited with Deborah Cullen the companion book, Caribbean: Art at the Crossroads of the World, co-published Yale University Press. Fuentes is currently Associate Curator at El Museo del Barrio, and is pursuing a PhD in Art History at Rutgers University, New Jersey. 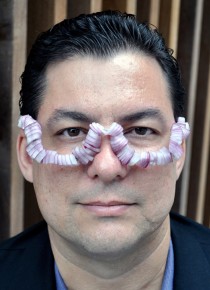