Former student of Ecole Nationale de la Photographie and intern at Musee de l’Elysee of Lausanne, in 2004 he founded KAUNAS PHOTO, now the longest running art photography festival in the Baltic states and has been directing the festival ever since. The festival spotlights emerging and freshly established photographers. In 2004, after the first edition of the festival, he started a small gallery F Galerija in Kaunas, located on the upper station of Kaunas Žaliakalnis funicular. The gallery focuses on showing works of emerging photographers from all over the world. Both Kaunas Photo festival and the F Galerija are now in the tenth year of activity.

He is a frequent portfolio reviewer, conference speaker, member of jury panels, in competitions, festivals of photography in Europe, United States, China, Australia. Mindaugas Kavaliaukas is an author of over thirty articles about photographers, photographic festivals, history of photography. His texts have been published in books, catalogues, scientific publications and art magazines in Lithuania and a number of introductory texts to books and presentations of artists “Foto” mag, Lithuania, of which he is a member of editorial board. 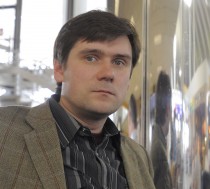