David Knaus has been involved in the visual arts as a both a patron and collector since the late 1980’s. His photography collection, broad in scope, includes works of photography and new media from the 19th through to the 21st Century and is comprised of over 1,500 objects. Knaus regularly lends and frequently donates objects from his collection to various museums around the world.

He was a founding member of the J. Paul Getty Museum Photographs Council. As well, he is a member of Tate Modern’s Photography Collection Council. In April 2012 he become a founding member of the Photography Initiative at the National Gallery of Art in Washington DC. As well he has had both a formal and informal relationship with the Center for Creative Photography at the University of Arizona, mostly involved in that institutions’ acquisitions of photographers Archives. In 2012 he started The Ranch Projects, (theranchprojects.org) which supports both arts publishing and site-specific installations on a 10-acre site in the high desert near Palm Springs, California. The common thread in Knaus’ involvement in all these institutions and organizations is their education and scholarship-centric programming, and collection building from both a philanthropic and private viewpoint.

David also serves on the board of Andrea Zittel’s High Desert Test Sites foundation and his private collection has been broadening to include non-photography-based works of contemporary art. In Late 2011 he became the Managing Director of the Marrakech Museum for Photography and Visual Arts in Morocco (mmpva.org) He was instrumental in forging the first of its kind private-public partnership between the Moroccan Ministry of Culture and the Museum to establish MMP+ at the historic 12th Century Badii Palace in Marrakech’s old medina. 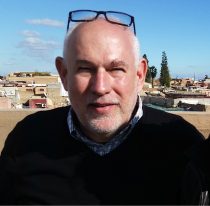