Marloes Krijnen (Amsterdam, 1955) is the Founding Director of Foam_Fotografiemuseum Amsterdam. She studied Political Sciences and Mass Communication at the University of Amsterdam and was the director of the World Press Photo for ten years.

Before becoming director of Foam, she was director/owner of Transworld, an agency representing an international group of photographers.

In the years since its start in 2001, Foam_Fotografiemuseum Amsterdam has established itself as a renowned platform for photography in all its forms. A strong (inter)national network and support of up-and-coming photographers being two of Foam’s most important ambitions.

Krijnen has also been involved in various juries, such as the ICP Infinity Awards, Les Rencontres d’Arles, the Recontres Africaines de la Photographie in Bamako, the Albert Renger-Patzsch Award of the Museum Folkwang in Essen and the Deutsche Börse Photography Prize.

Besides that, she is the Editor-in-chief of Foam Magazine, an award winning internationally distributed photography magazine, published by Foam and Vandejong Communications. 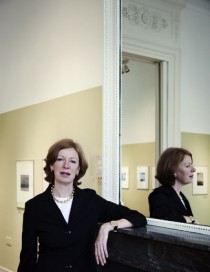