Nadira Aklouche-Laggoune is a curator and art critic. Since 2016, she is Director of the National Museum of Modern and Contemporary Art in Algiers. She graduated in Law and gained a Master Degree in Audiovisual and Critical theory of art, a doctoral student in art, she is currently a lecturer at the Ecole Supérieure des Beaux Arts in Algiers where she teaches the history of the contemporary image, aesthetics and leads a seminar on contemporary art since 1986 to date.
She had successively been the Head of Department of Plastic Arts (1996/2003) and Director of Studies (2003/2005) in the Ecole Supérieure des Beaux-Arts d’Alger. She has taught in parallel the mastery of critic and aesthetics at the Higher Institute of Dramatic Art and the Higher Institute of Music in Algiers from 1995 to 2000.

She has been on numerous juries of plastics arts in Algeria and abroad including the Grands Prizes for Painting in the city of Algiers, the Arab Fund for Culture (AFAC), the Algerian Film Panorama. Today she is member of the Fund for Assistance to the Algerian Cinematographic Production, International Association of Art Critics, Scientific committee of the exhibition for the new museum MUCEM Marseille 2013.

Nadira Laggoune-Aklouche lives and works in Algiers, where she works to give visibility to new generations emerging in the field of contemporary art in Algeria and the African continent. 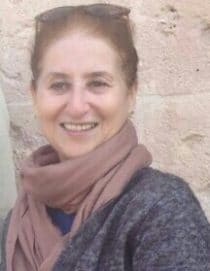