As a curator and photo activist Ryan Libre received a grant from the W. Eugene Smith Memorial Fund to start Documentary Arts Asia, a not for profit foundation to support documentary photo & film in Asia, with galleries, libraries, cinemas, residencies, workshops and he directs the Chiang Mai Documentary Arts Festival & F/28 month of photography and has given two TEDx talks.

Next to his curatorial activity Ryan practices photography and spends a lot of time getting to know his subjects. Ryan’s photography has been exhibited at over 20 galleries, including the Nikon Salon and the Fuji Film Salon, as well as in the mass media.  He is the winner of the Nikon Inspiration Award & a grant from the Pulitzer Center.

Ryan is also involved in media education. He has taught semester long university courses and regularly teaches custom workshops throughout Asia for organizations such as, UNESCO, the EU, the Olympic Committee and many more.

When not working on projects, curating or teaching, he enjoys working on his organic adobe solar homestead in northern Thailand. 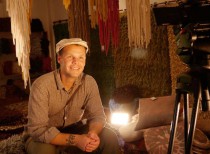