Marc Prüst is active as photography consultant and curator. In that capacity he edits books, creates exhibitions, teaches, lectures, and advises photographers on how to develop their work and how to market it. Marc works in close cooperation with photographers, with the goal of telling the photographer’s story, to recreate through the images the things the photographer wants to say. By getting to know the person behind the camera, the aim is to create the story and the presentation fitting to the work.

As a founding partner of i-bmp he coaches photographers and advises on their marketing and promotion. He is one of three curators for the FotoGrafia festival in Rome for the period 2010 – 2012, and is creative director of the only photo festival in Nigeria, LagosPhoto. He has successfully launched the Northern Lights Masterclass, a one year masterclass for professional photojournalists and social documentary photographers, in September 2010. Prüst also teaches Visual Identity classes at Spéos Photographic Institute in Paris. From November 2010 to November 2011 he acted as the Executive Director of The Manuel Rivera-Ortiz Foundation for International Photography. The Foundation’s aim is to support social documentary photographers in the majority world through grants and commissions.

Marc Prüst (1975) worked for the World Press Photo Foundation from 2001 to 2007, where he organized and installed exhibitions all over the world. In 2005 he was responsible for the exhibition and award winning publication “Things As They Are, Photo Journalism in Context since 1955”, for which he worked in close cooperation with curator Christian Caujolle and editor Chris Boot. In 2007 he moved on to Agence VU’ where he was mainly responsible for the international cultural activities of the agency. 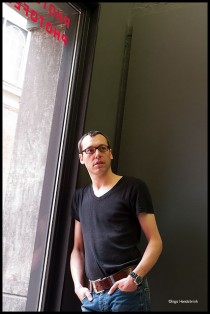