Activist writer and visual artist using painting, drawing, photography and video art for social change. He taught Cognitive Science and Art Theory, and his Ph.D. Thesis was referenced in philosopher Jean Clam’s Orexis. G.H. Rabbath engaged in several meta-artistic interventions in the art world since 2009 and the publication of ‘Can One Man Save the (Art) World’. In 2010 he curated M. Obaidi’s latest show in Art Dubai along side publishing ‘Mr Obaidi and the Fair Skies® Corporation’ that addressed the neuroscience of racial bias in relation to conceptual art. In 2013, he launched The Better World Project, and on November 28, 2014, was part of the official festivities for the observance of the United Nations’ International Year of Justice for the Palestinian People, at U.N. HQ in Beirut where he showed The Better World Project portraits of Palestinians as well as U.N. staff. As of October 2015, a special edition of The Better World Project called “Signing with Light” can be seen in the recently published book “The Gulf” at OR books on behalf of the GulfLabor.org artist coalition fighting for the rights of migrant labor in the U.A.E. and Gulf countries. In 2016, he launched The Better World Project in Europe, and in 2018 did a five months performance intervention at the Amedeo Lia Museum, and the Museo Tecnico Navale of La Spezia. In 2019, he will be doing a yearlong portrait drawing performance in all Italy and draw 30,000 portraits to raise funds for NGOs working for human rights. 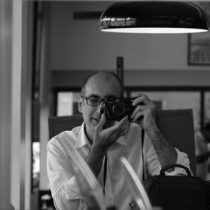