After graduating from the Sorbonne in Paris, Yasmina Reggad worked internationally in public institutions and the publishing industry before settling in the UK to establish herself as an independent curator. She also founded her non-profit organisation Photo-Festivals for which she initiated and presently curates artists residencies (Crossing Point Residency), events and public programmes (Collectives Encounter, nofound_photoreviews and nofound_phototalks). She is also co-Founder of Photo Forum Beirut and a member of the curatorial board of Paraty Em Foco.

Yasmina’s passionate promotion of photo festival culture and in particular the photo collective has resulted in a series of notable curatorial collaborations that include guest curator at Paraty em Foco in Brazil, visiting curator at Foto Colectania Foundation in Spain, co-curator of the World Photography Organisation’s London Photography Festival, curator of the Collectives Encounter at
the 2009 and 2011 Format International Photography Festival in the UK and co-curation of From Here, an interim show for the Brighton Fringe Festival.

In addition to writing for Revista Replicante, Autograph ABP, Times, The International Curators Forum or the Sao Paulo Street Biennial catalogue, Yasmina is regularly called upon to participate in panel discussions and talks for organisations and galleries such as the National Photography Symposium, Host Gallery, Cornerhouse, Casa Tomada and Iniva. She also reviewed portfolio in the UK, Brazil, France, Spain and the Middle East. 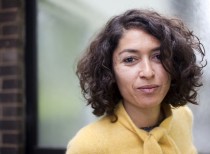