Moshe has over 40 years’ experience in the media as a photojournalist, award-winning television producer/director (SBS TV) and commercial photographer. Moshe has held lecturing positions at the University of Technology (UTS), the Australian Film, Television and Radio School (AFTRS) and others. Moshe has sat on judging panels for various competitions including The Walkleys, Tokyo Photography Prize, Sydney’s Art & About and is the lead judge for Head On Photo Awards.

Moshe received an Order of Australia Medal for services to the arts. 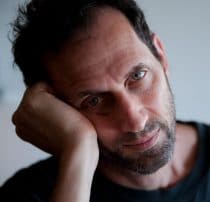