Rudy, who has been a collector for over 20 years, started collecting modern art before moving into contemporary art a few years later. He founded his contemporary art collection on Young British Artists (YBA) and has since built a wide collection of Chinese, European/American and Asian contemporary art (including Taiwan, Japan and Southeast Asia), including, for example, artworks by Hsieh Tehching, Chen Chieh-Jen, Michael Lin and Tsui Kuang-Yu.

Rudy began his career in advertising with Leo Burnett and Ogilvy & Mather before 17 years of experience in the film industry. He first served as Warner Brother’s Taiwan (Far East) Marketing Director before working in ERA International, which is known for its productions of ‘Raise the Red Lantern’ and ‘To Live’ by the renowned Chinese director Zhang Yimou. Subsequently, Rudy was Vice President and General Manager of Buena Vista International (Taiwan), the film division of The Walt Disney Company from 1995 to 2001. He became the Managing Director of Walt Disney International, Taiwan in 2001 and was responsible for the company’s overall operations in Taiwan. Before retiring, Rudy was an Assistant Professor at the Shieh Chien University Graduate Institute of Visual Media. 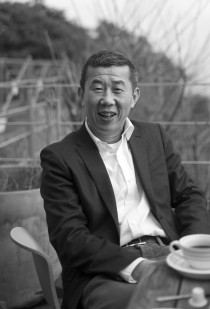