Michael Schmidt once called himself a ‘blind alley’ photographer, “… that means that I stroll straight into a cul-de-sac and can’t find a way out. Then I come to terms with this as a sort of condition and at some point later on, I’m back on the outside again. (…) That is to say, failure or making mistakes is an integral part of my way of working.” The photographer is identifying two essential elements of his work by saying this: that he refuses to quote his own work, preferring in each new series and the new pictorial language developed for it to take the risk of failing; and that he works in projects, each one over a period of four to five years, which means that he is taking a twofold risk: “With a project, the new and surprising thing lies in the drafting and execution of the plans. It is daring, harbours great ambitions, and by no means has at hand all the means and knowledge necessary to complete it. […] A project is exploratory, forming a coalition with the unknown, and hence it can also fail.” (Michael Hagner)

The photographs themselves seem to belie this almost reckless approach to work: they surprise by being entirely unheroic. In the famous “Waffenruhe” (Truce; 1985-1987) and “EIN-HEIT” (U-NIT-Y) series, both presented as one-man shows in venues including the Museum of Modern Art in New York, he mixes his own photographs with photographs by other people, sometimes extensively and without drawing any distinction. In his great photographic essay “EIN-HEIT” about the so-called reunification of Germany he combines historical images from the National Socialist period and the history of the two German states with current city views and portraits cutting across all social strata. Project such as “Frauen” (1997-1999) or “Irgendwo” (2001-2004), even though like all Michael Schmidt’s series they were taken entirely in black and white, are characterized by an almost complete absence of black and white notes: instead we have a wealth of grey tones that looks more realistic that any colour photograph could. Even though Schmidt has made an intensive study of great documentary photographers such as Walker Evans, for example, it is not possible to pin down his style. He sets the realistic against the documentary. He sets subjective treatment of the object against objective treatment, including people as objects. And despite the unmistakably contemporary quality of every project, the different series always convey a historical awareness that is so strong that they point far beyond the moment the shot was taken.

Michael Schmidt’s ability to translate apparently contradictory elements of his photography into a valid form puts him in an outstanding position among contemporary photographers. Though he adopts an unusual position with his constantly different approach to photographic and social questions, his innovative project-led working methods and his extreme commitment have made him a model for a generation of young photographers.

Unlike some of Schmidt’s earlier series, these photographs do not strike an attitude of rage or accusation. On the contrary, his way of looking at things is characterised by extreme lucidity and rigour. His view of bread baskets, cages in fish farms or apple-washing plants has a serial analytical quality that is sometimes reminiscent of the objective photography of the 1920s. But it is precisely the contradiction between classical photographers’ latently optimistic approach, who stage their industrial production motifs in a perfect aesthetic and Schmidt’s realistic view that makes a distressing impression when looking at the project as a whole: individual images demand objective consideration, while the series persistently undermines the apparently dominant objectivity by means of its composition of repetitions, accentuations and rhythms, and the many links between the photographs.

Logically, the exhibition and the catalogue for “LEBENSMITTEL” form two different media. “For example, if I am arranging a double page spread, it is important for me that one plus one equals three. A third, invisible image has got to impose itself in between. That is to say, two pictures are combined to form an argument and a third picture results from it. This can perpetuate itself indefinitely, with the effect that when you are looking at a lot of images, at some point another one forms in your mind distinct from the one you are objectively observing.” (Schmidt) Even though the catalogue and the exhibition are to a large percentage showing the same pictures, the photographer’s hanging always relates to the specific exhibition location. 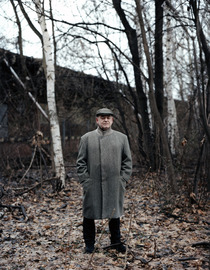