Dijkstra met the subject of what would become her longest-running series to date while making portraits at a refugee centre in Leiden, The Netherlands. Five years old at the time, Almerisa arrived with her family from Bosnia (by way of Austria and Germany) just two weeks earlier. Dijkstra prepared a small, bare studio with a chair in the corner of the room where the girl was staying. In the resulting image, with her brightly coloured Bosnian-chic dress, straightforward pose, and direct, intense gaze, Almerisa offers striking contrast to the empty beige walls and floors that surround her.
In each of the next ten images, Almerisa is centred in the middle of the frame and shown seated against a wall or window in a neutral area of the place she was living at the time of the portrait. Typically made one or two years apart, each photograph shows how Almerisa’s appearance changes with her adjustment to Dutch culture. From a shy Bosnian girl she grows up to be a young Western woman who wears the right branded clothes and fashionable make-up. But Almerisa is also a girl who needs these clothes and make-up to build up her own image, her own self, just as she sees everyone else doing, around her as well in the omnipresent Western media (and she keeps doubting about wearing shoes in the house – Bosnians don’t).
Taken as a whole, Almerisa documents the transition in a girl’s life, not only showing her adjustment to a new culture, but also the way she tries to find herself by experimenting with different modes of outward appearance. In the most recent image, the young girl from the beginning of the series sits confidently as an adult with her own child on her lap; a boy she has with her husband who’s originally from Surinam. The cycle of life starts all over again. 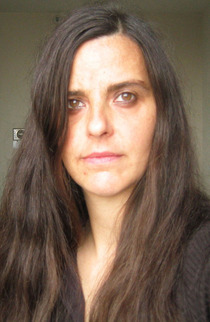