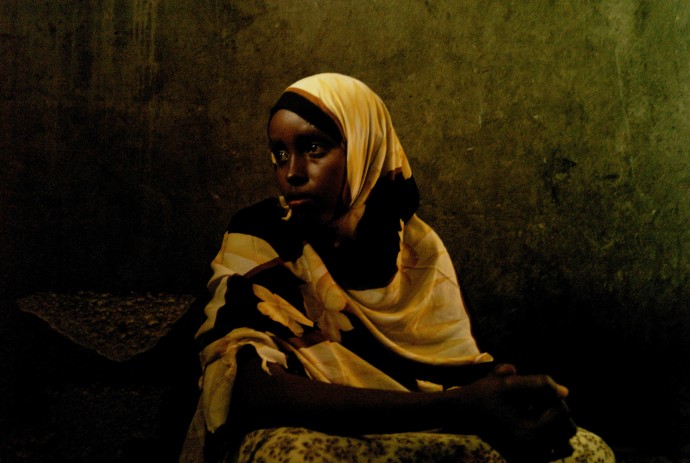 BASATINE, YEMEN- MARCH 2008
Salima is nineteen and is wearing red lipstick but the clothes she has on are not her own. She doesn’t like them and appears very bashful- or “shying” as she puts it.Along the rubbish-strewn lanes of Basatine, her temporary home is a cramped, dark room in a safe house controlled by trafficking gangs. There are four such clandestine houses hidden in this shantytown, sending young Somali men and women on to Saudi Arabia, where they hope to find work and a better life. Having fled the ongoing violence the plagues their homeland, they are now free to stay with the human traffickers until they find the $25 that they need to be driven into the desert. Here it can take weeks here to save that kind of money.Salima has been going begging. Living the last three weeks in a daze, she returns from the city each evening to sleep on a threadbare mattress. If she is late, she passes out on the bare floor surrounded by twenty other women who share this makeshift room knocked together from thin plywood sheeting. Lately the rain has been seeping in. Far from home and without any other choice, this is all there is. She looks totally drained. The last six weeks of her life have been a nightmare.From a generation that has known nothing but war, Salima grew up in Mogadishu but despite the risks, she was determined to stay. Along with her baby boy Abdi Sallam and the husband she adored, the family stuck together in their little two-storey house. “It was our home. My favourite place in the world”. And besides, Salima was pregnant again.One morning, undeterred by the sound of gunfire in the distance, Salima popped out to buy some bread for the family’s breakfast. A man walking ahead of her fell to the ground, hit by a stray bullet. Rushing over to the wounded stranger, the screech of a Hound rocket sent her crashing to the ground. Mortars had pierced the upper floor of her home. “I found my husband and child but they were not with us anymore”. Both