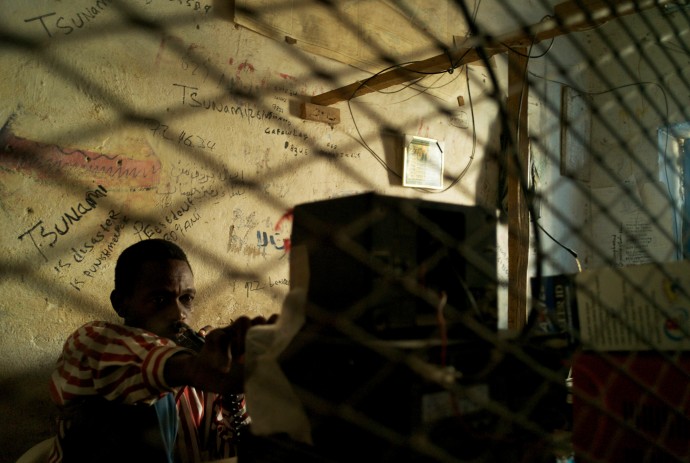 BOSASSO, SOMALIA- DECEMBER 2007
Working for a people trafficking syndicate, a CB radio operator talks to truck drivers bringing migrants along the Mogadishu Road to Bossaso. Known as “Radio Kabila” after Congo’s president, this Hawiye smuggling gang’s Bossaso office is linked to a chain of others across south central Somalia.Sitting behind a fenced off desk, the operator slowly attends to a row of migrants and refugees that have been sitting on plastic chairs under a painted skull and cross-bones since early morning. On their way to Yemen, they are waiting for hawala money transfers to arrive from relatives; few have carried enough cash for their onward sea journey fearing robbery on the roads. Their families will have to visit a sister office to send the money and it cannot be paid out here until the operator receives a call on the radio. Once it comes, it is unlikely that it will ever leave Radio Kabila. Most will immediately pay the fare of a million shillings to the boss in order to secure their passage across the Gulf of Aden. For now though they must be patient, the agent is busy talking to middlemen as they coordinate a pick-up of the latest batch of human cargo due to arrive in town any moment.