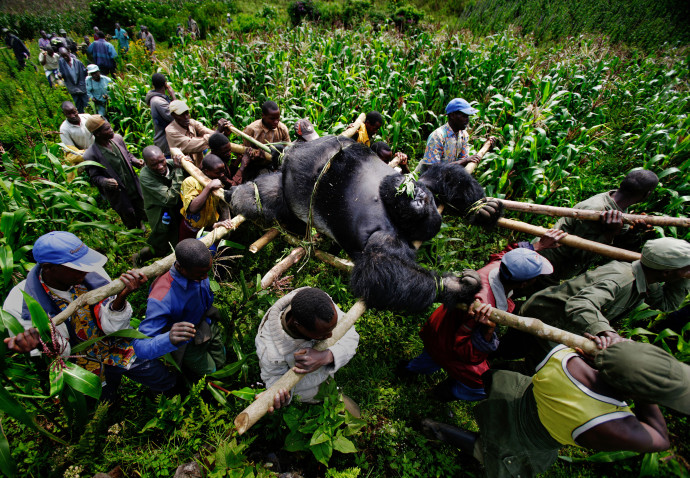 A Silver-Back alpha male, the leader of the group was shot 10 times with AK47 bullets. Four female mountain gorillas were also killed by AK fire, one of them sadistically burned as she lay wounded. Two of the females had babies and another was pregnant. The two babies were not found and it is thought that they would have fled and died of stress and dehydration. The motivation for the killing was later discovered to be a powerful and illegal charcoal lobby in the nearby city of Goma who killed the gorillas to impose their will on conservation rangers seeking to protect the gorilla habitat. This habit has the best hardwood trees for charcoal production, a 40 million dollar per annum industry in this region. The local illegal charcoal industry clashes with conservation efforts in this very poor area and Rangers have been threatened, tortured and killed as a result of this clash of political and economic wills. Over 150 Rangers have been killed in their efforts to protect the Gorillas of Virunga, one of the world’s most endangered species with just over 800 mountain gorillas remaining in the world. The DRC has the highest toll of human casualties of any country since the second world war, a figure in the region of 5.4 million dead as a result of war and resultant displacement, disease, starvation and ongoing militia violence.