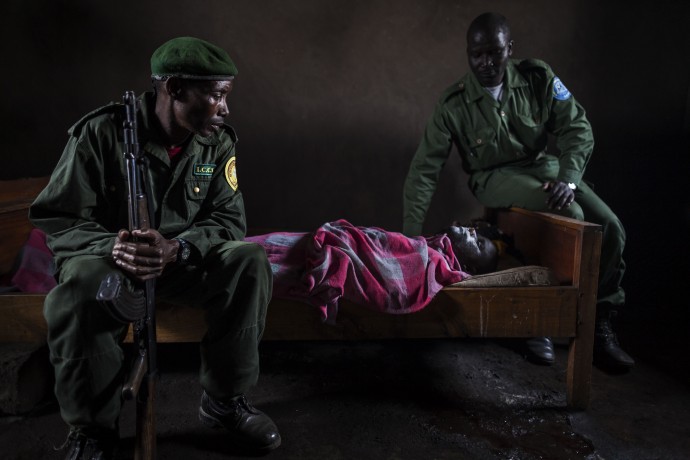 ISHANGO RANGER STATION, VIRUNGA NATIONAL PARK, DEMOCRATIC REPUBLIC OF CONGO, 29 February 2008: ICCN Ranger Kambale Kalibumba was killed by a suspected FDLR rebel soldier who shot the Ranger 5 times at close range. At the time the Ranger was in the park on the way to the Ishango post with rations for the patrol. Now in 2015 the man in the background of this image is also dead, killed by rebels while defending the park. More than 160 rangers have died in the last ten years as a result of their work in Virunga National Park, many at the hands of the FDLR, the Rwandan Hutu genocidaires who fled into Virunga after the Rwandan Genocide and who have spread havoc in their exploitations of the park ever since. The FDLR have a long history of killing elephants in Virunga in pursuit fo ivory to finance their campaign. They do this in collusions with elements of the Congolese army, also a fixture in the park and a problem for conservation.