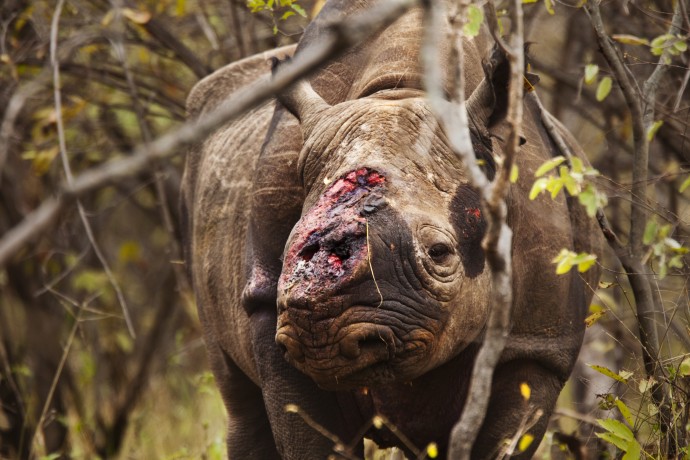 SAVE’ VALLEY CONSERVANCY, MASVINGA, ZIMBABWE, APRIL 2011: A Black Rhino Bull that has been shot 4 times by poachers and had its horn removed, leaving only a massive infected wound. The rhino was left for dead by the poachers but recovered and was found wandering through the bush approximately 4 days after the incident, his face bleeding and screw-worm breeding in the wound. A decision was made to keep the animal alive rather than put him down and heavy doses of anti-biotics were administered. This Rhino died from his wounds one week after this photo was taken. Save’ Valley Conservancy has lost a total of 66 Rhino to Poachers since 2002, including 10 in 2011. Rhino game ranchers in Zimbabwe speak of a number of issues when it comes to protecting their animals in Zimbabwe. There are issues of politics which affect the number of tourists that visit, this has been very low since 2000. Despite the fact that the Rhino actually belong to the state, private ranchers are asked to hire government Rangers from the State at considerable expense in order to protect them. This makes the economics of raising Rhino very difficult. Issues of security are difficult as it is hard to procure automatic weapons from a paranoid government and prosecution for the shooting of poachers can be very biased towards the locals. There is a perception on the part of government that training of Rangers is paramilitary and thus a threat. Rhino horn is currently worth more than gold and the numbers of Rhino killed in Africa currently exceeds over 1500 every year. This is out of a remaining population of under 20 000. The numbers killed annually have risen steadily every years since 2008.