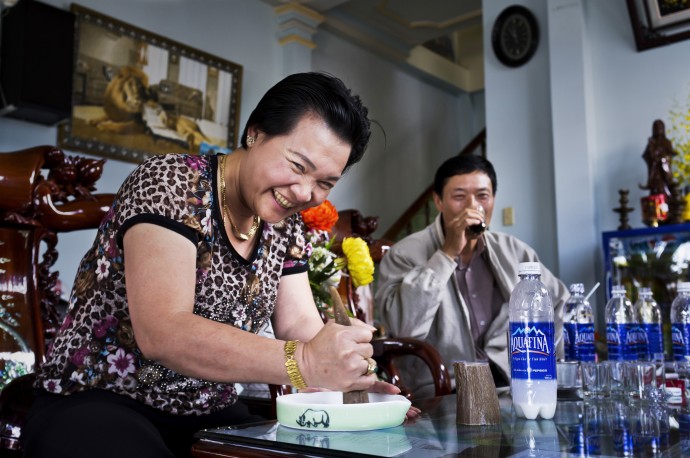 Baoloc, Vietnam, 6 October 2011: A wealthy Vietnamese woman sits and grinds Rhino horn for her personal consumption in a roadside café in Baoloc, Vietnam. The dealer who sold her the horn sits next to her. Rhino Horn is an illegal substance in Vietnam yet both the woman and her dealer have no fear of the police, grinding the horn in a café in full view of the street. The dealer states that he pays $1500 a month to the right people and they can carry on with impunity. The woman says that it has cured her Kidney Stones and now she takes it daily for her general health. Rhino horn is generally used as a fever reducing agent and for the removal of toxins across Vietnam, the biggest market for Rhino horn today. Rhino horn has even been held up as a cure for Cancer by a senior Minister in the Vietnamese government. Rhino horn is now worth more than gold on the international market. 100 grams of Rhino horn in Vietnam sells for $2500 to locals and over $8500 to foreign buyers, these were the prices consistently offered to myself in meetings with 5 separate dealers across the country in October 2011. The demand for Rhino horn is now increasingly fueled by a newly wealthy Asian middle and upper class that can afford the substance which was previously only for the wealthy. The price is further affected by the controlling influence of organized crime. The horn is used overwhelmingly as an anti-fever, anti-toxins medication, with thousands of years of cultural belief behind the practice. This is despite the fact that Rhino horn is now an illegal substance around the world. In 2015 we are losing over 1500 rhino to illegal poaching every year. There are less than 20 000 rhino left in the world and at this compounded rate of killing, the Rhino is racing to extinction.