An African phantom: between ruins and modernity

The history of his country has influenced Sammy’s works. The latter photographs are dedicated to the industrial culture of Congo;  a country characterized by many mineral sources that were exploited by Belgian colonisers.

In 2004, Baloji became fascinated by the phantom character of the Gécamines (General Mines Society) factories in Lubumbashi. They are the symbol of the past wealth epoch of Katanga and show a particular side of Africa – the industrial side.
These are the Baloji’s thoughts on memories and the ruins of colonisation:

“My previous works were dedicated to colonial architecture. To some extent, my current works have a direct connection with the colonial past, which gave birth to the cities of Katanga province. These cities were built upon mines. The latter belong to Katanga’s history. The essence of my question lies in the daily life of Congolese people. They are traces of the recent past, which is also present.”

Sammy Baloji’s images are not merely glances at that reality, but photomontages that merge ancient black and white photos of mines of Union Minière du Haut Katanga with contemporary colour images of actual mines and devastated landscapes.

In a review of his exhibition, Fondation Blachère reported:

“Sammy Baloji lets us brutally remain in the reality. Through photography we illustrate history. On one hand, there are desolated landscapes where all humanity has disappeared. They tell us about a working past, which was responsible for wealth and pride: nowadays, that dream of pride has disappeared and it has left only some metallic structures which are slowly working. On the other hand, there are black and white images of the colonial past. It was only yesterday. Men who were chained up, naked, skeletal, we look at from great distance. In some photomontages, with metallic structure as background, those men sleep dignifiedly and are looked upon by us. This is a repossession of that past, in order to look forward.”

Sammy Baloji illustrates the history of the Congo, which has several dark sides.

He says, “To superimpose past onto present reveals the will to denounce past and present abuses.” 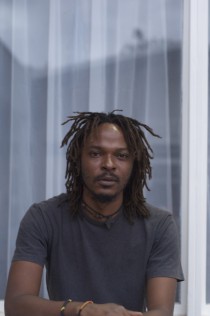