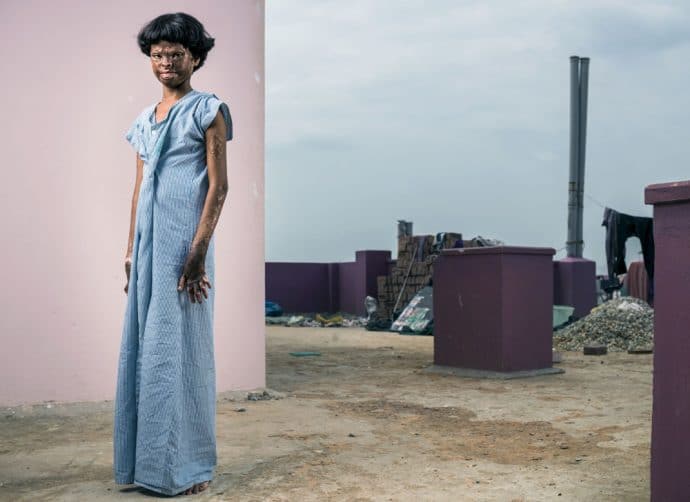 Kumkum Chowdhary, 13, photographed by herself on the roof of a small donor-funded burns hospital in Varanassi, India. Kumkum is a victim of severe burns from a gas fire. India has one of the highest incidents of severe burns per capita yet has very few proper burns units throughout the country. Kumkum was severely burned when a naive boy in her village asked to hold a candle while he tried to transfer gas from one canister to another. He promised Kumkum a sweet if she would help him. The resultant explosion burnt her over most of her body, the boy was uninjured and ran away. Kumkum was in great pain and her burns constricted her terribly for more than three years with only basic medical care. Her parents are very poor people and they cannot afford the necessary travel let alone medical care she requires. This hospital in Varanassi is one of the very few the poor can access. It is based on the efforts of a single doctor, Dr Subodh Singh, a plastic surgeon who has made it his priority to serve the poor who would otherwise never be able to access this kind of surgery. Kumkum first had her hands repaired to offer some use and in her impending surgery, her face and body will be attended to. It will require at least one more year of surgeries and recovery before she will be able to lead a normal life. This recovery is not something she would ever be able to access without the help of this unique facility.
2013

Series: Burns Capital Of The World, 2013