I have a recurring daydream. Bodiless, I float in outer space and watch from a distance as the sun swallows up the Earth. Everything that has ever breathed or been built now burns away. I recognize the thrumming of life just before it returns to its disintegrated and silent state of origin. The dream is a strangely calm chance of recognition of all that would have been worth saving.

Similarly, I am drawn to moments of reflection in my photographs. With self portraiture as starting point, my aim is to recognize myself in others, and to have them see themselves in me. In The Wake in particular speaks of destruction and rebirth. Digitally stripping places from clear historic and geographic markers, and bodies from the confines of their social reality, I imagine what core remains when layers of our everyday are dissolved one by one.

With characters visually submersed in landscapes, separation between their inside and outside melts away. Vulnerability permeates it all. Webs of dark smoke up in the air and deep in one’s lungs: in the words of Judith Butler, the potential of being hurt is an undeniable connection between humans and other ecosystems, one that can and should not be overcome. The strength in being fundamentally endangered is an intrinsic entanglement that calls into question ideas of one neatly defined self. Rather, every self expands into its relations to its environment.

The series is also informed by reflections on the construction of nature – and how tales of its entanglement with bodies have been as romanticized as dangerous. What is this ideal state supposedly preceding culture? Who profits from the idea of untouched wilderness – and thus of the opposing concept of civilization? How has it assisted the construction of Blackness and the exploitation of what is perceived as other? How can Black people think of themselves as complete outside a white matrix, when we are constantly tethered by social reality, and thrown back onto images of Blackness conjured by whiteness? If the fire’s touch has seeped beneath skin, how can you escape it?

IN THE WAKE is set after the blaze, and refers to a space in which these constraints have been left behind. Through fantasy, I want to visualize that bodies and their environments extend into each other, and that being fundamentally hurt and fundamentally whole are not mutually exclusive states for either of them – they hold intrinsic worth. Soot drifts through the air, sticks to skin, mingles with Blackness. Yet, the figure in A Hollow Burn floats far above the fire. The character in Wildfire has long inhaled it, the fire will continue to burn within and dark whips adorn their head – but their gaze is propelled forward, meets the viewer. None of us should have to burn. Since we do, let the ashes paint a clear picture of our belonging. Every body is a means of the universe to witness itself. 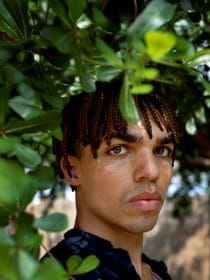