Filmmakers and artists, Joana Hadjithomas and Khalil Joreige question the fabrication of images and representations, the construction of imaginaries, and the writing of history. Their artworks create thematic and formal links between photography, video, performance, installation and cinema.

The artists are known for their long-term research based on personal or political documents, with particular interests in the traces of the invisible and the absent, histories kept secret such as the disappearances during the Lebanese Civil War, a forgotten space project from the 1960s, the strange consequences of Internet scams and spams or the geological and archaeological undergrounds of cities. Among their major artworks, Circle of Confusion, Wonder Beirut, The Lebanese Rocket Society, SCAMS, I stared at Beauty So Much and Unconformities, showcased at the Centre Georges Pompidou (Paris) and awarded the prestigious Marcel Duchamp Prize in 2017.

They both regularly present lecture-performances including Aida Save Me and Latent Images and are often invited as university lecturers in Lebanon and Europe. They are the co-founder of Abbout Productions and executive members of the board of Metropolis Cinema and the Cinemathèque of Beirut. 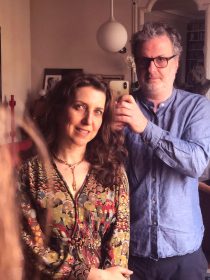