Chris Jordan is a 46-year-old photographic artist based in Seattle, USA. His work explores the detritus of mass culture, from images of mountains of garbage in his project titled Intolerable Beauty; to the devastation of Hurricane Katrina in his series titled In Katrina’s Wake; to Running the Numbers, his digitally-manipulated photographs depicting hundreds of thousands of cell phones, aluminum cans, plastic bottles, and the like.

In his newest project, Midway: Message From The Gyre, Chris returns to traditional photography to document a richly symbolic environmental tragedy: the plastic-filled carcasses of dead baby albatrosses on Midway Atoll in the Pacific. These images draw the viewer intimately into the horrors of global mass-consumerism, reminding us that the consequences of our unchecked growth extend to every corner of the globe.

Chris’s Midway images have reached a worldwide audience in 2010, but prints of this series have not yet been publicly exhibited. 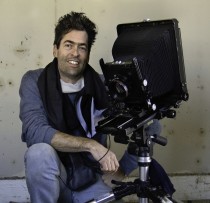