Apparently, life style gets rather repetitive in Evergreen Tower. Modern Seoul city attracts all sorts of people from the whole country for many reasons. Some of them work at factories and the others at office. The nesting ground for these home seekers in the ‘stranger’s city’ – Seoul, is the Evergreen Tower. 150 square feet of identical living room spaces are heavenly ground for the tired salary men who return from their hardworking routine to find warm hearted families waiting for them. A modern loving family scene can be easily started in this concrete square tower.

Evergreen Tower consists of thirty-two family portraits from an apartment block in Gwangin-gu Gwangjang-dong, Seoul. I visited thirty-two families in their houses and took portraits of the people in their living room. Since all the families live in the same building, the architectural structure is the same except the changes in decoration and the family.

I was trying to portrait the individual life of the nuclear families within the mass production houses of the Seoul city. 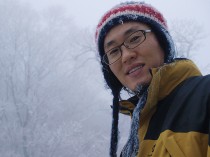