Carl De Keyzer started his career as a freelance photographer in 1982, while supporting himself as a photography instructor at the Royal Academy of Fine Arts in Ghent. At the same time, he became the co-founder and co-director of the XYZ-Photography Gallery. A Magnum nominee in 1990, he became a full member in 1994.

De Keyzer, who regularly exhibits his work in European galleries and museums, is represented in many important collections including those at the Museum of Contemporary Art, Ghent, Fnac Collection, Paris, Centro de Arte, Salamanca and the Magnum Photo Collection, Harry Ransom Center, University of Texas, Austin. He is the recipient of many awards including Les Rencontres d’Arles Book Award, Hasselblad Foundation International Award in Photography (1986), W. Eugene Smith Award (1990) and Prix de la Critique Kodak (1992).

De Keyzer tackles large-scale projects and general themes. A basic premise in much of his work is that, in overpopulated communities everywhere, disaster has already struck and infrastructures are on the verge of collapse. His style is not dependent on isolated images; instead, he prefers an accumulation of images which interact with text (often taken from his own travel diaries). He has published many books including: India (1987), Homo Sovieticus (1989), God, Inc. (1992), East of Eden (1996), EVROPA (2000), ZONA (2003), Trinity (2007), Congo (Belge) (2010) and Moments Before the Flood (2012). 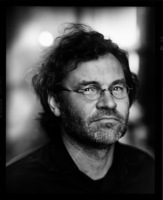