Guantanamo: If the Light Goes Out

The continuing existence of the detention camps at Guantanamo Bay symbolises the imbalance of power that is the ‘Global War on Terror’. Since President Bush claimed the authority to indefinitely imprison anyone deemed an ‘enemy combatant’, hundreds of men from all over the world have been shipped to Guantanamo. Many have been imprisoned for years, subjected to interrogation abuses and denied fundamental due process rights. A handful were driven to suicide. It is in the daily process of their incarceration that the exercise of absolute power over the individual is most clearly seen. Every detail is controlled: whether a detainee is allowed toilet paper, mail or a pen, or whether his cell is in constant light or darkness. A man deemed non-compliant can be moved hourly from cell to cell or kept in solitary confinement; one who refuses to eat will be strapped to a chair and a tube forced down his nose. Of the 779 men detained, six have been convicted by military commissions. Despite President Obama’s pledge to close the camps, 171 remain incarcerated with little prospect of release or trial. Working under military censorship, this series explores the spaces and objects of power and control at Guantanamo. 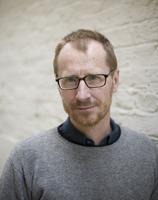