Her work has been widely collected and exhibited, including shows at Huis Marseille, Amsterdam, Fotomuseum Winterthur, Amador Gallery, New York, the International Center of Photography, New York, Tokyo Metropolitan Museum of Photography, The Photographers’ Gallery, London, the Victoria and Albert Museum, London and the Guangzhou Museum of Art. She is a visiting lecturer at Harvard University, Cambridge, MA and the International Center of Photography in New York. Hassink is an award winner of the Prix No Limit at Les Rencontres d’Arles. 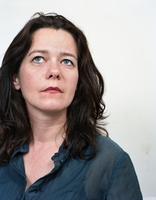