I try to put myself in situations that I feel have a certain relevance regarding what we call a shared destiny. The reality I’m interested in is that of people who struggle to act upon it as much as they are subject to it. I sometimes work where power presents itself as a spectacle, as an event produced for or with the media, and my pictures may then take an ironic undertone. But I photograph the ordinary man more often than the leader. I usually stay at the distance where the human relationships are visible, multiple, active and where they remain problematic. I’m interested in narration and in photography’s phenomenological hold on the real.

There’s often a certain degree of lyricism in my images. It remains fairly cool and contained, but it colours them and seems to arrive as soon as they represent people, especially when they’re involved in an action with a tragic dimension. It’s a quality that has disappeared from advanced societies, where we are limited to the individual, utilitarian and ultimately absurd gesture. This gives me another reason, probably, to go to those places of hardship. It’s clear that I don’t really photograph the world as it is, but either as it should not be – hardship – or as it should be – man restored to history, an uncertain destiny yet a possibility of fellowship. 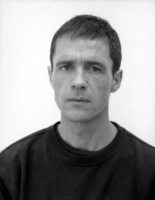