Clear-cutting is a controversial forestry practice in which most or all trees in an area are uniformly cut down. More than 90 per cent of the original forest in the American Northwest has been clear-cut at least once. The large stumps in these pictures are remnants of ancient woods where trees commonly grow to be five hundred or more years old. The small stumps are what is left of a recently ‘harvested’ monoculture, an industrial forest sustained by artificial fertilisers and selective herbicides and cut in its infancy.

Will this practice eventually exhaust the soil and end in permanent deforestation? There are numerous areas in the world where this has happened, among them parts of China, a country that has recently banned clear-cutting. Efforts to restrict clear-cutting in the American Northwest have, however, mostly failed. As I recorded these scenes, I found myself considering many questions, among them: Is there a relationship between clear-cutting and war, the landscape of one being in some respects like the landscape of the other? Does clear-cutting teach violence? Does it contribute to nihilism? 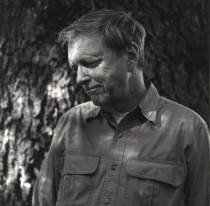