Landscapes and Battles:
Two wings wait for the end of the tragedy

Colombia is a country rich in water. It has paramos (high moors), and rainforests, and hundreds of rivers and lakes water the national territory. Two oceans bathe us, and the region along the Pacific coast is considered one of the rainiest areas in the world. The Andes mountain range and the Amazon are two of the richest fresh water reserves on the planet, in these habitats thousands of species of birds, flowers, mammals and butterflies abound.

But Colombia is thirsty for social justice and peace, for it suffers from a prolonged war that has lasted for over 50 years, in which the poorest of the poor have always been the losers. Out of the 1,013 counties that the country is divided into, only 104 have potable water – the rest do not have a supply fit for human consumption. In 2007 twenty thousand children died from conditions related to the consumption of contaminated water. At the same time, the best lands of the campesinos (small farmers) are being violently seized. More than three million people have been forcibly displaced from their homes and communities in the last ten years. This information does not make the headlines, though the war does. The bulk of the national budget goes towards war, not health or education.

Both the guerillas and the paramilitaries promise wellbeing and a better future, but meanwhile they destroy life and nature, planting coca and antipersonnel mines that poison rivers and woods and mutilate campesinos and indigenous people. The war is the best excuse for the corrupt. It perpetuates injustice and pain. 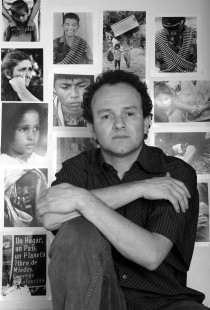