I currently live and work on Dartmoor, Devon which has been home, studio and work location for the past seventeen years.

I have exhibited within the UK and internationally, working on numerous publications, public commissions and educational projects.

Woman Thinking River and catalogue, Fraenkel Gallery, San Fransisco and James Danziger Gallery, New York 1999, Natural Magic at the Museum of the History of Science, Oxford, 2001. Transience of Nature was a retrospective exhibition and catalogue at the Tokyo Design centre, 2003.

My work is held in numerous public and private collections as well as public commissions within the UK, Europe, US, Japan and Korea. I have recently completed a major public commission for The Eden Project, Cornwall, an ecological research center, internationally known for the large biodomes housing tropical rainforest and temperate zones. 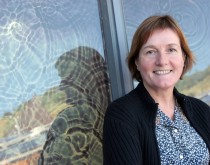