One of the greatest environmental disasters of our time: The Chinese ‘Dust Bowl’ is probably the largest conversion of productive land into sand anywhere in the world. Deserts cover 18% of China today. Of those, 78% are natural, while humans created 22%.

With unsustainable practices, to date, Chinese farmers and herders have transformed about 400,000 square kilometres of cropland and verdant prairie into new desert. The shepherds have overgrazed the steppes, allowing their sheep and goats to chew the grass all the way down to its roots. The farmers, for their part, have over-exploited the arable land by opening fragile grasslands to cultivation and over pumping rivers and aquifers in the oases bordering the ancient deserts. As the deep aquifer under the North China Plain is depleted, the region is losing its last water reserve, its only safety cushion, stretching the capacity of the Yellow River.

The soil, once it is barren, is swept up by the wind into dust storms, battering the capital, Beijing, and then moving on to Korea and Japan. The most massive of the yellow clouds of dust make their way across the Pacific and reach North America. The loss of precious topsoil for Chinese agriculture ends up polluting both China’s cities and countries halfway around the world. The area of the desert thus created is equivalent to more than half the farmland in Canada. Three hundred
million people are affected by dust storms in China. One hundred and eighty million people depend on the Yellow River. Hundreds of thousands of people have already been relocated and cities with ecological refugees have been created. The Chinese ‘Dust Bowl’ is a fascinating subject. It is a compelling environmental manmade disaster and photographically an interesting journey. When I embarked on this trip I was convinced that I could make surreal images and at the same time raise awareness. This is about scarce water resources, desertification and ecological refugees in China. 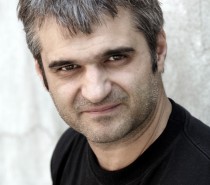