Epstein has worked as a director, cinematographer, and production designer on several films, including Dad, Salaam Bombay! and Mississippi Masala.

He lives in New York City with his wife and daughter. 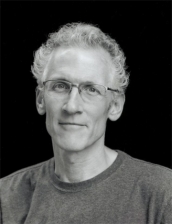