Professor Sir David King is the Director of the Smith School of Enterprise and Environment at the University of Oxford. He was the UK Government’s Chief Scientific Adviser and Head of the Government Office of Science from October 2000 to December 2007. In that time, he raised the profile of the need for governments to act on climate change and was instrumental in creating the new £1 billion Energy Technologies Institute. In 2008 he co-authored The Hot Topic (Bloomsbury) on this subject.

As Director of the Government’s Foresight Programme, he created an in-depth horizon scanning process that advised government on a wide range of long-term issues, from flooding to obesity. He also chaired the government’s Global Science and Innovation Forum from its inception. He advised government on issues including the foot-and-mouth disease epidemic of 2001; post 9/11 risks to the UK; GM foods; energy provision; and innovation and wealth creation. He was also heavily involved in the Government’s Science and Innovation Strategy 2004-2014. 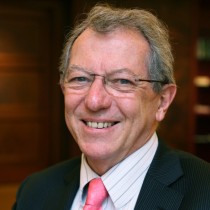