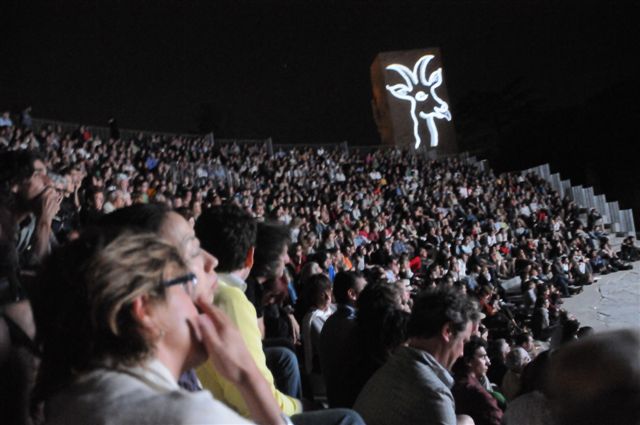 The Prix Pictet Earth shortlist was announced at a special evening screening in Arles on 9 July. The screening was part of the opening events of the 40th Les Rencontres d’Arles festival. An audience of over 2,500 people watched as the portfolios of the twelve shortlisted artists appeared before them, one after the other, on the giant screen that had been erected at the heart of Arles’ Théâtre Antique.

What they saw was a stunning collection of images by twelve photographers from nine different countries. The list included some of the world’s leading artists together with some comparative newcomers. Each of them had produced outstandingly powerful work on ‘Earth’ – the theme of this years award.

The shortlist was selected from what the chairman of the jury, Francis Hodgson, described as an ‘exceptional’ submission, from over three hundred international candidates. The shortlisted artists will now prepare for an exhibition at Passage de Retz, Paris, where the winner of this year’s Prix Pictet will be announced by Kofi Annan on 22 October 2009. A further award, in the form of a commission for one of the shortlisted photographers to visit a region where Pictet & Cie are currently supporting a sustainability project, will be announced at the same time.

The shortlisted artists are:

An independent jury of seven leading figures from the worlds of the visual arts and the environment applauded the power and artistic excellence of the 2009 submissions, exploring the theme of ‘earth’ and the man-made scars left upon it by unsustainable human enterprise. The photographs tell of the harmful and often irreversible effects of exploiting the earth’s resources, and reflect on the immediate and long-term impact of unsustainable development on communities across the globe.

Subjects featured in the work of the shortlisted artists range from scenes of a Mexican garbage dump where people forage to sustain a pitiful existence, to the documentation of the changing landscape and displaced communities of China’s Yangtze River, to the depiction of the devastating impact of oil production in the Niger Delta, to name but a few.