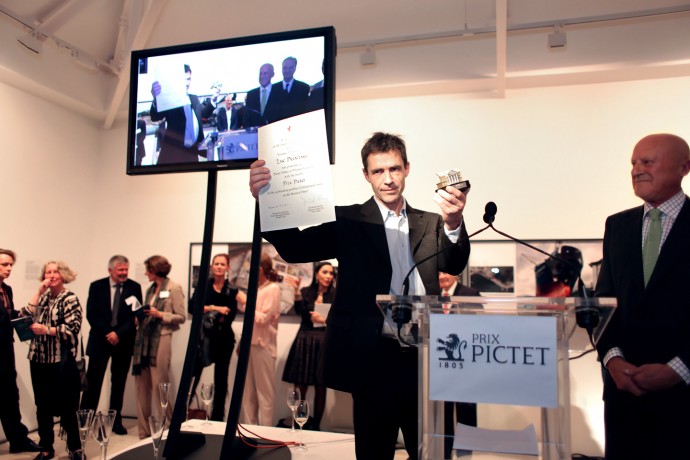 Luc Delahaye was announced as the winner of the Prix Pictet Power at the Saatchi Gallery, London on 9 October 2012. Delahaye was shortlisted for his 10-image submission drawn from the outstanding body of work that he made from 2008-2011, and was awarded by an independent Jury of 8 people. This is the first time the winner announcement has been made in London, and the work of the twelve shortlisted artists will be exhibited at the Saatchi Gallery until 28 October 2012, and is free to the public.

The winner of the Prix Pictet Commission was also announced as Simon Norfolk. Norfolk will travel to Afghanistan, where Pictet & Cie plans to support the work of the Swiss-based charity Medair who are providing crucial support to the Bamyan Province.

Speaking on behalf of the Jury, Professor Sir David King, Chair of the Judges, said, ‘This was an extremely close-run contest. There was real strength in each of the artists’ portfolios that we reviewed. From Robert Adams’s magnificent, lyrical essay on the notorious practice of clear cutting to Mohammed Bourouissa’s brilliantly successful evocation of the tensions that exist on the margins of our great cities, we were time and again faced with profound narratives of the environmental and social damage of which we are all capable. We were also deeply moved by Joel Sternfeld’s portrait of the despair so often felt by those charged with taking preventative measures. But ultimately the sheer artistic excellence, dramatic intensity and narrative power of Luc Delahaye’s photographs shone through. He is a very worthy winner of the fourth Prix Pictet.’