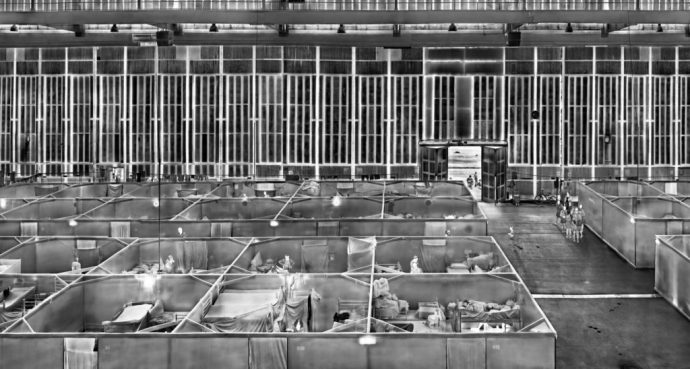 Last night at the Victoria and Albert Museum in London it was announced that the Irish photographer Richard Mosse had become the winner of the seventh Prix Pictet. His series Heat Maps documents refugee camps and staging sites using an extreme telephoto military grade thermal camera that can detect body heat from a distance of 30.3 km. The camera is used against its intended purpose of battlefield awareness and border enforcement to map landscapes of human displacement.

Richard Mosse was selected for the CHF 100,000 (£78,000) prize from a shortlist of twelve outstanding photographers by the independent Jury, chaired by Sir David King. An exhibition of works selected from the portfolios submitted by the shortlisted photographers will continue at the Victoria and Albert Museum until 28 May. The Space exhibition will then begin a global tour. Venues already confirmed include: Zurich, Tokyo, Stuttgart, Brussels, Moscow, New York and San Diego. The announcement was made by Kofi Annan, honorary President of the Prix Pictet.

To read The Guardian article written by Sean O’Hagan follow the link here.