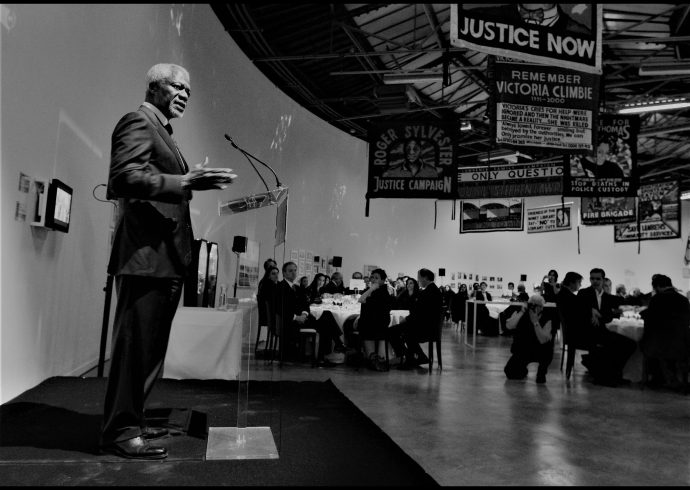 To mark the 10th anniversary of the Prix Pictet, Pictet is delighted to announce a special one-off award of £10,000 to be given to a photographer under the age of 30 for the best proposal to complete a body of work based on an issue of sustainability.

The award will be given on the basis of a written proposal with a full project outline, sample photographs and a budget breakdown indicating how award money will be used to complete the project.

The award is open to any photographer under 30 years of age on 1 October 2018. This is an international award and photographers from any part of the world are eligible. The commission can be produced in any photographic medium, including film and video, with a time limit of 10 minutes for film works. It must be suitable for reproduction across all platforms, including the printed page, the gallery wall and online.

The submission process, as with the main Prix Pictet, will be by nomination only. Recommendations will be made by a group of international nominators. Applications from individual photographers will not be considered.

Nominators will be asked to make their recommendations no later than Thursday 28 February 2019.

The winning project will be selected by a panel of five international judges chaired by Emma Bowkett, the Photography Director of FT Weekend Magazine. The Jury looks for the best proposal to complete a body of work embracing the theme of sustainability which has a high artistic quality and considerable narrative power. Judging will take place early in 2019 and the winner will be announced shortly after.

Personal data submitted to Prix Pictet as part of the award will be processed by Prix Pictet in accordance with any applicable data protection legislation and Prix Pictet’s Privacy Policy.

This award is administered by the Prix Pictet Secretariat, Candlestar Ltd, Somerset House, Strand, London, WC2R 1LA in partnership with The Financial Times Limited (“FT”), Number One Southwark Bridge, London, SE1 9HL. To the fullest extent permitted by law, FT excludes liability for all loss, damage or claim arising as a result of entry into the award or use of the prize (save in the case of death or personal injury caused by the negligence of FT). Nominators and those nominated agree to hold FT harmless for any liability, damages or claims for injury or loss to any person or property, relating to, directly or indirectly, participation in this award, or claims based on publicity rights, third party intellectual property rights, defamation or invasion of privacy. The award is governed by English law and the English Courts shall have exclusive jurisdiction. The award is void where prohibited by local laws or regulations.

This year marks the tenth anniversary of the Prix Pictet. Founded in 2008 by the Pictet Group, the Prix Pictet has become the world’s leading award for photography and sustainability. To date there have been seven cycles of the award each of which has highlighted a particular facet of sustainability. The seven themes are: Water, Earth, Growth, Power, Consumption, Disorder and Space. The theme for the eighth cycle of the award is Hope.

The network of nominators worldwide (currently numbering 300) have, over the course of the seven cycles, nominated 4,200 artists for the award. Taken together the nominated works present a powerful testament to the fragile state of our planet.

Since 2008 the seven cycles of the Prix Pictet have been shown in exhibitions in many major cities of the world with visitor numbers of over 550,000.

For each of the Prix Pictet themes a book has been published and distributed worldwide. Each book showcases the work the shortlisted photographers as well as powerful images produced by a selection of the other nominated photographers.