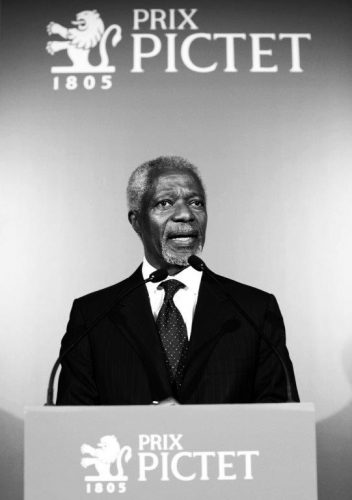 It was with immense sadness that we learned, on Saturday 18th August, of the death of Kofi Annan. He served as honorary president of the Prix Pictet from its inception in 2008. Commenting on the influence he had on the prize since its early days, the Chairman of the Prix Pictet, Stephen Barber, said, ‘Apart from being a statesman of global renown, Kofi Annan was a great champion of sustainability. His wise counsel and the inspirational example of his actions helped us shape the prize. He is unforgettable and he is irreplaceable.’

Writing in the first Prix Pictet book, Water, Kofi Annan outlined his hope that the photographs submitted for the award would ‘confront us with the scale of the threats we face and inspire all of us to step up to the challenge and support change for a sustainable world’.

The current Prix Pictet laureate, Richard Mosse, recently summed up the feelings of everyone who encountered him in saying, ‘Meeting Kofi Annan was one of the greatest honours of my life. I have profound respect for him, the risks he took in his work and how seriously he worked to assist and advocate for refugees and displaced people around the world. We need him now more than ever.’